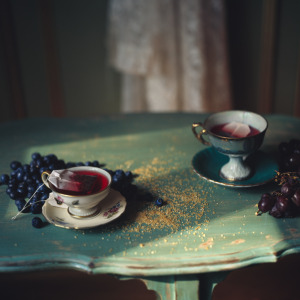 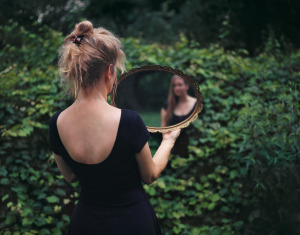 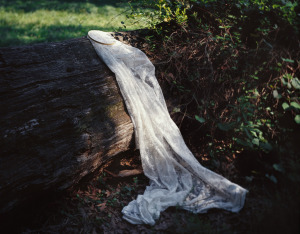 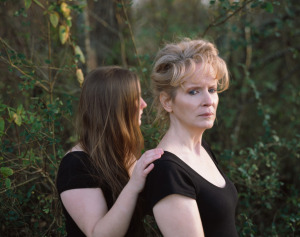 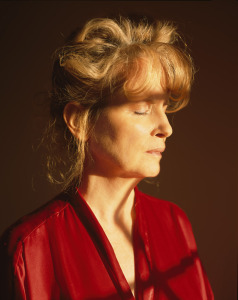 If I Forget © Ashley Kauschinger 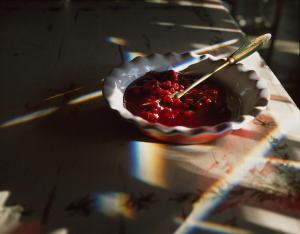 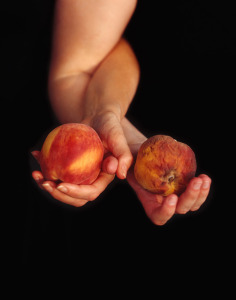 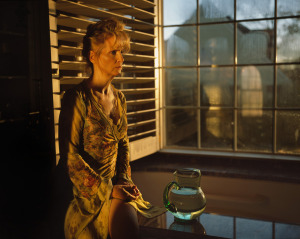 Artist’s Statement: Questions of Origin is a series that investigates complicated aspects of the mother/daughter relationship and distills them into constructed narratives that evolved from childhood memories of the adult daughter. These ideas are communicated through the use of symbolism and metaphor, to encourage the viewer to project their own experiences onto the photographs. The imagery primarily occurs within two settings: landscape and domestic space, and are used to communicate aspects of being a woman. The landscape images represent the female body, and draws upon the metaphor of the land creating life. The domestic space is utilized to represent society’s view of the role of women, and to recall memories of learning how to be a woman from the maternal figure. Throughout the series, still lives use objects that are personal but act as universally relatable symbols of femininity, such as thread, cloth, and kitchen tools. These objects draw a connection between what is passed down from mother to daughter, such as learning to sew and cook, as well as family heirlooms. The dual portraits explore the past and present. Throughout the work, the two figures communicate through gesture to investigate the relationship and emotional connection between the mother and daughter. The individual portraits contemplate the mother and daughter when separated, and examine past memories, the search for independence, and feelings of loneliness and longing.

Please join photographer Ashley Kauschinger and educator Karen Lacey for a discussion of the extraordinarily complicated relationships between mothers and daughters. Celeste Headlee of Georgia Public Broadcasting will moderate the discussion, which builds upon Ashley’s photography show, “Questions of Origin” and is underwritten by a grant from Georgia Humanities. 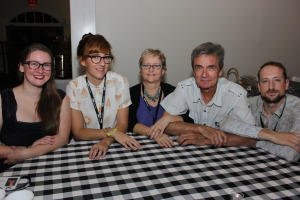 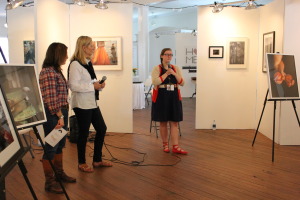 Ashley is a serious. exciting, and promising young photographer.  Take advantage of this opportunity to meet and talk photography and family with Ashley Kauschinger!  “Questions of Origin” on display throughout SlowExposures 2015, September 17 – 20, 2015.

Biographical Information:  Ashley Kauschinger is a narrative photographer and book artist that explores identity and family. She received her BFA from Savannah College of Art and Design and her MFA from Texas Woman’s University in Denton, Texas. Her photographs have been exhibited nationally in venues such as the Griffin Museum of Photography and the RayKo Gallery. She has been published in the PDN Photo Annual, the South Atlantic Review, Lenscratch, Fototazo, F-Stop Magazine, and Flak Photo. She was a Critical Mass Finalist in 2012 and 2014. Ashley is also the Founding Editor of Light Leaked, an online photography magazine that creates dialogue and community. Ashley lives and works in Columbia, SC where she is an adjunct professor at the University of South Carolina.