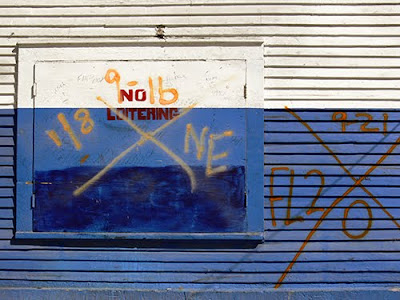 For the fifth anniversary of Hurricane Katrina, the online journal, Southern Spaces, has announced the publication of Katrina + 5: An X-Code Exhibition by Dorothy Moye.
In an earlier commentary for Southern Spaces, Dorothy Moye described the widespread use of the X-code, an iconic graphic applied by search-and-rescue teams in 2005 post-Katrina New Orleans. In this virtual exhibition, Moye presents X-code images selected from the work of more than twenty-five photographers in the intervening five years. Visually striking and emotionally compelling, the X-code speaks through its sheer numbers, its rhythmic repetition across the curving network of city streets, its narrative traces of ciphered messages, and its graphic directness.
Paul Conlan, a principal with the SlowExposures committee and featured photographer in the show, has 13 photos included in this work, including images from the Lower Ninth Ward, Bywater, Faubourg Marigny and French Quarter areas of New Orleans. Note that due to the large number of photos and photo slide shows incorporated in this work it takes awhile for the online document to fully load. Be sure to scroll through the slide shows.
Posted in Uncategorized.

This site uses Akismet to reduce spam. Learn how your comment data is processed.